Our experiences at the Tapobhoomi – 1 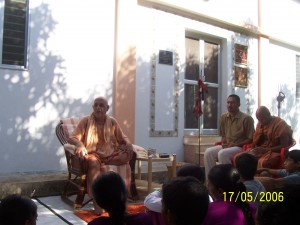 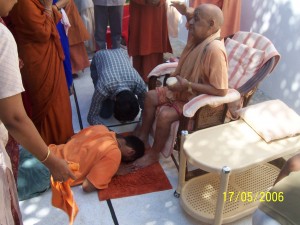 In May 2004, I arranged for a trip of orphan children from Chennai. I was teaching yoga for all the children in the orphanage, for many years. There were about 85 children and about 20 adults in the group that visited ashram. It was extremely hot. Children however had a great time, they learnt yoga, kirtan, they performed bhajans, dance and drama and it was a very fulfilling experience. We were informed that it will not be possible to have the darshan of Sri Swamiji, since he was not coming out those times, he was mostly in seclusion, doing his penance.

Activities were going on steadily at ashram pace. In a few days, when we were just going to return, there was a sudden good news, that Sri Swamiji had decided to come out of his seclusion and give us a darshan. We were all so excited and felt blessed about the privileged opportunity we would have. We spoke to the children and asked them to prepare a kirtan. We wanted to sing a special kirtan on Ganesha, which was very famous in Taminadu.

We rehearsed several times and all of us assembled in Akhada in front of Ganesh Kutir. Sri Swamiji was sitting there, I was given a chair to sit beside him and got personally introduced to Sri Swamiji as the person who has brought the group. He turned to me and cast a penetrating and meaningful gaze, the strength of which is still uplifting me and the yoga work that started through the Satyananda Yoga Centre.

Then he was introduced to the children and all of a sudden Sri Swamiji started speaking to the children in Tamil. All those who were assembled there were surprised and excited. He said, “I decided to come out because, I want to see you all. You come from the place which was Swami Sivanandaji’s birthplace – Tamilnadu! His devotion to his Guru was a great example for us to imbibe.

He started talking to them like how a grandfather of a grand family would start relating with his grand children, very soon they all felt Sri Swamiji as part of their life, such was the connection he established with each and every child. After talking to them for a while, he asked them if they knew the famous kirtan on Ganesa.

He then began to sing out in his inimitable voice and style, gently clapping and a smile over his face!

Bringing 85 children from Chennai across 3000 kilometers, by train and returning safely was an arduous task, at every stage from boarding the train in Chennai to returning to Chennai, Sri Swamiji’s blessings and grace has always guided and protected the efforts. Every trip was a total challenge, It was always extremely difficult. We always feel that our hand is held by Sri Swamiji and all difficulties are overcome, all challenges are won over!

If you want to go back to previous page