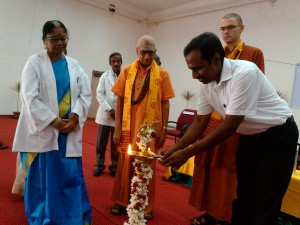 The light lit by Dr.Elanthirayan in Cuddalore has reached to every nook and corner of Cuddalore. With the regular visit of teachers from Satyananda Yoga Centre, Triplicane, Chennai, interest was developed in Cuddalore to such as extent that the need for starting a dedicated centre arose. With the contributions and support of the citizens of Cuddalore and the consistent effort of Dr.Elathirayan, Satyananda Yoga Centre now has a lovely centre and several courses and programs are offered at the centre, at schools, colleges, Cuddalore Central Jail and in hundreds of locations over the last about five years.

Cuddalore Yoga Festival, was a landmark program in Cuddlore’s history of Satyananda Yoga. We had the good fortune of inviting Swami Atmabhishek and Sannyasi Thulasi on behalf of Bihar School of Yoga to conduct shivirs, lectures, workshops and several programs in the three days when they stayed at Cuddalore!

In 2014, Cuddalore had the opportunity to host maximum number of ACOGYT sessions. Here is a gallery of several sessions conducted in Hospitals, Schools, Offices, Homes. It was very well received that we had to start the Satyananda Yoga Centre in Cuddalore to cater to the need of the people of Cuddalore.

Courses offered: At present teachers from Chennai are visiting Cuddalore four days a week. Basic level, second level and Sadhana Shibiram are offered at our centre in Cuddalore.

Several seva projects are being taken up by our team at Cuddalore.

For details about the courses