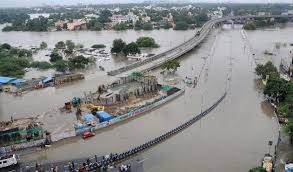 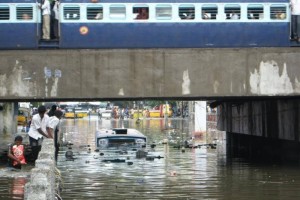 On 2nd December morning around 6am we received a distress call from Balamandir Kamarajar Trust, in T.Nagar. We were told that Balamandir campus was marooned with 6ft water all around and 300 children were stranded in the first floor of the main building and that they had not eaten anything and need food. Thanigaivelan asked if we could go to T.Nagar and hand over some food to the children!

We could not understand how it would be possible for so much water to come in T.Nagar. We had never heard of water inundating into T.Nagar. We were unsure of the level of water and enquired about the water level, tried reaching some fishermen who could give us a boat .

Meanwhile we received another distress call from a friend, he said that Venkatraman street, in T.Nagar was flooded. He said water level was at 5 feet and around 20 people in his building were stranded. He requested if we can arrange for a boat, his family and people in the building wanted to be rescued. We tried making calls to several numbers that were making rounds, but in vain.

Finally we decided that since vehicles could not make it through the water, we would carry the food for children of Balamandir in a tricycle. We loaded bread for the children in a tricycle and headed to T.Nagar. We decided that we shall take the tricycle to the point that would be possible and then, figure out how to take the food inside Balamandir. 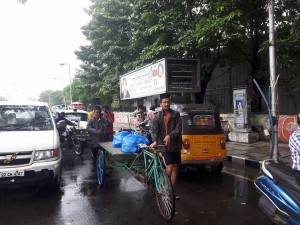 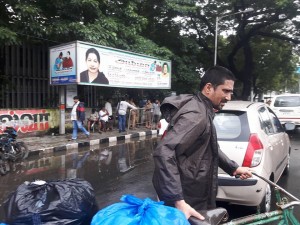 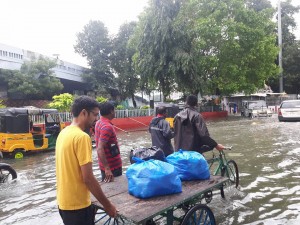 We did not realize the size and seriousness of the problem until we reached near the Church Park Convent on Mount Road. Most vehicles trying to ply the Anna flyover and the road adjacent to the American consulate were, redirected. The Lloyds road adjacent to Oxford Press was having hip deep water. We overheard that the flood in Adyar river had breached the Saidapet Maraimalai Adigal bridge and it was flooding the whole of Mount road, Teynampet was marooned!

When we went past Anna flyover and entered into G.N.Chetty road, the scene that our eyes beheld was shocking! We could not see anything but water. When we had reached up to the old Sun theatre building there was hip deep water and our cycle rickshaw was going to be submerged. We had carried bread, biscuits, water and we did not want them to be spoilt. We searched for something that would elevate the level of the food packets and got hold of a road divider, tried keeping food packets on top of that, it was not enough and there was nothing around except water and we were for few moments blocked for ideas. The sight of so much water had just blocked the flow of ideas. 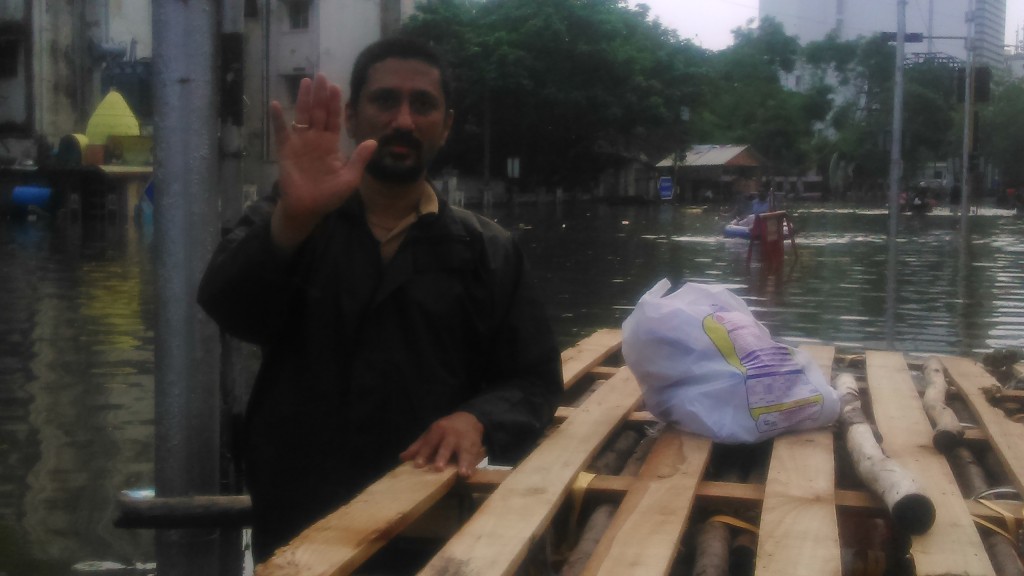 A man was standing on the road divider and was seeing our predicament, he gave a brilliant and simple idea. He said that two of the volunteers could climb up and kneel on the tricycle, then keep the food on their shoulders. We took his idea and moved the vehicle at snails pace to a point in front of Balamandir.

Water level in front of the gate was up to chest deep. We carried the food above our head and slowly walked into the Balamadir premises and handed over the first supply to the girls who were stranded there. We supplied two more rounds of supply before afternoon. Food, biscuits, water, candles, match box were given.

Seeing the condition we thought that it would take weeks for this water to come down and normalcy to return to T.Nagar. We prayed that the people of T.Nagar be protected and saved by the grace of the lord.